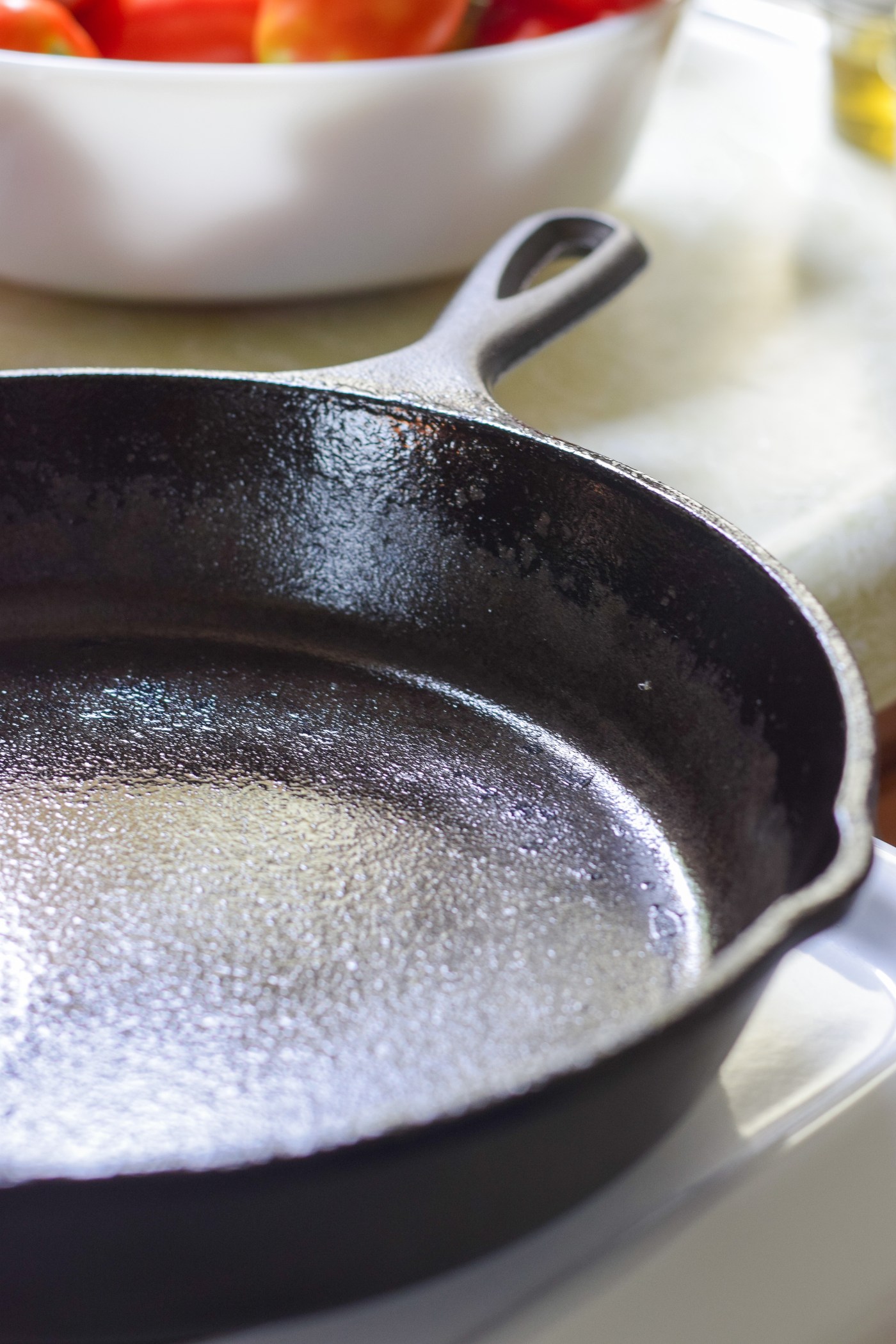 Cooking with cast iron is a major learning curve….one that nearly scared me away from the process altogether. Thankfully, I stuck it out, continued to practice, and learned from my mistakes. Boy, I am so glad I didn’t give up!

Just as there are some Dos and Don’t of Cleaning Cast Iron, some Cast Iron Mistakes to Avoid, and the process of Seasoning Cast Iron, cooking with it comes with some rules as well. What better way to learn how to cook with cast iron than to learn from the mistakes other people have made?

This blog post is all about 5 tips for successfully cooking with cast iron! Struggling with burnt or sticking food? Give these few tips a try and I’m pretty sure you’ll see a difference in no time. Each of these tid-bits have been gathered from my own personal experience, so I promise they work! You’ll also find a few more blog posts at the end of this page focused on more cast iron topics.

Tips for Cooking with Cast Iron

1. Always allow cast iron to warm before adding food to it.

I gotta tell you…this tip right here was the biggest game-changer in my cast iron journey! I started out by placing the food I wanted to bake or cook in a cold pan, followed all the other tips I had heard, but everything still cooked or baked oddly and ended up sticking.

Then I tried heating my skillet before adding any kind of food item to it. Wow, did it make a difference!

Simply allow the cast iron to warm on medium heat or in a preheated oven for 5-7 minutes. This will ensure that the surface is hot, the seasoning is activated, and everything is ready for use.

2. Re-season after each use.

I discuss this concept in more detail in my The Dos and Don’ts of Cleaning Cast Iron post, so be sure to read more there!

The basic concept is to add a little oil to the pan after each use and cleaning. This is not as complicated as it sounds (read the details in the post I mentioned above)! This will reinforce the layer of seasoning on the pan and prep it for the next use.

Cast iron holds heat better than any other cooking material. This is one of the main reasons people love using it, but it can take some getting used to.

For example, you may be accustomed to baking brownies at 350 degrees for 10 minutes in a normal baking dish. Try lowering that temperature to 250 if you experience issues with the sides cooking too quickly. You might cook chicken on medium heat, but find that the meat dries out on that same temperature in a cast iron skillet. Simply adjust and try again until you find the best cooking/baking times for cast iron.

The internet is also full of cast iron recipes for both baking and cooking, so look up some tips for the specific food items you’re working with. It may give you the exact information you need!

4. Move the food as little as possible while cooking.

I’ve found that flipping and moving food in a cast iron skillet can lead to sticking. I suggest placing the food on a hot pan and allowing the cast iron to do the work for you.

You may need to lower the temperature so that one side doesn’t burn. For example, I enjoy cooking potato wedges in a skillet. I allow the pan to get hot, place olive oil in it, add the potatoes, cover with a glass lid, and allow them to cook on medium heat for 10-15 minutes. I’ll then flip the wedges after that time is up, add a little more oil if needed, cover, and allow to finish cooking for another 10-15 minutes.

One or two flips may not hurt the cooking process at all, but the point is to allow the cast iron to work it’s magic!

The more you cook with cast iron, the more comfortable you will become with it. Read other people’s thoughts, tips, and advice, but at the end of the day you’ll learn the most by making mistakes and trying again!

Don’t allow the bad experiences, like crusty black bits of chicken, stop you from ever cooking with cast iron again. I made numerous mistakes (and still do), but I am much more comfortable with it now than I was before.

I promise that a little patience, practice, and stick-to-it-iveness will get you loving cast iron!