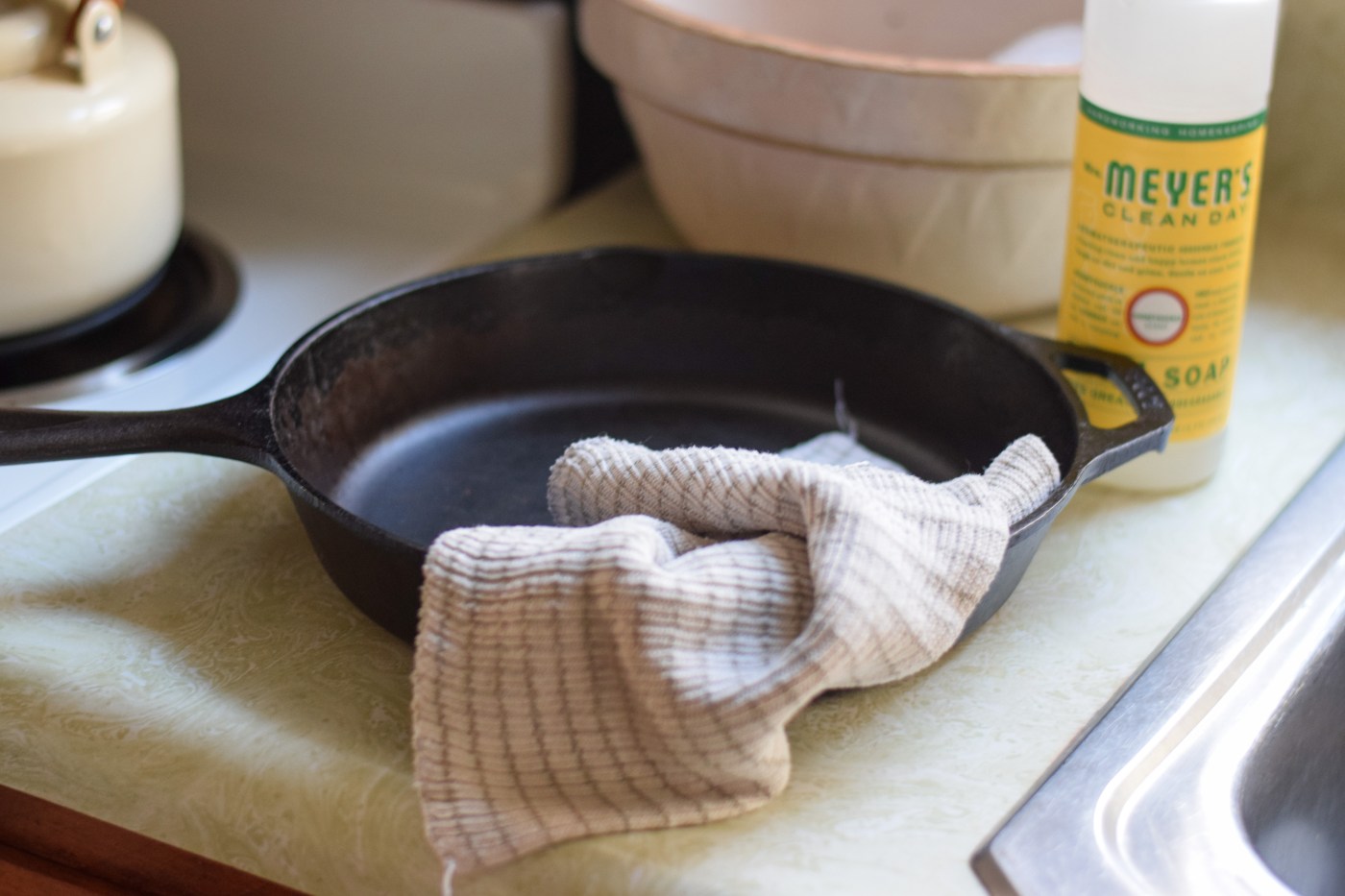 I’ve made countless mistakes when it comes to cleaning my cast iron skillet. I can’t say that I’ve perfected the process yet, but I’ve definitely gathered a few tips and tricks along the way!

Washing a cast iron pan is not quite as simple as using a soapy rag, drying, and putting it away until next the next meal. The whole process will probably sound tedious and not worth the effort at first, but after some practice it really does not take any much more time to clean cast iron than those non-stick pans!

The whole goal of this post is to discuss some helpful tips for washing cast iron in a way that best maintains the seasoning. If you you are new to cooking with cast iron, you’ve probably discovered that washing these tools is a bit different than regular pots and pans. Each of these tips have been gathered from my own personal experience, so I promise they work! Getting that skillet nice and clean without ruining the seasoning is totally possible! Let’s discuss how to get there.

1. Rinse before the cast iron has fully cooled.

This tip was an absolute game-changer for me! I started out simply making dinner and leaving my skillet alone until after the meal when it was time to clean the kitchen. This not only allowed the pan to completely cool, but it also hardened any food residue to the surface, thus making it so difficult to come clean.

I soon realized that wiping away the food residue while the pan was warm made the whole process so much easier. Please note that I do not recommend washing cast iron as soon as it is taken off the heat. This metal becomes extremely hot, so give it 5-10 minutes to cool a bit.

I use this trick all the time! Just fill the skillet or pan with water, heat on high until the water comes to a boil. Sit back and watch all those stubborn potato skins and other residue float to the surface. Pour the water out after 5-7 minutes of boiling (the pan and water will be extremely hot, so use caution!). Wipe the surface clean, scrubbing off anything that didn’t quite come up. Proceed with the remaining steps of drying and seasoning.

I suggest using only water to wash cast iron as much as you possibly can, but there are times when it just simply isn’t enough. Contrary to popular belief, soap will not ruin your pans! I will say that it is not a good idea to allow the pan to soak in water for any amount of time as this can lead to rust.

Use warm water and a gentle dish soap (find my non-toxic recipe here) to scrub away any stubborn spots.

Avoid using very abrasive scrubbers like steel wool or scouring pads because they will remove the seasoning you’ve worked so hard to build up.

3. Dry very well before storing away.

I briefly mentioned rust a little bit ago, but it’s time to talk about it some more. It can be a major problem with cast iron and the best way to avoid it is by drying thoroughly before putting your pans and skillets away.

Once again, be sure to sure non-abrasive dish towels for drying in order to maintain the seasoning on the surface. I suggest avoiding the use of light-colored towels as the cast iron can leave dark residue that stains.

Another way to ensure that your cast iron is dry is by placing it on a warm burner or oven until all the water droplets have disappeared. This method will prevent rust and also avoid staining your dish towels!

4. Reinforce the seasoning after each wash.

This sounds more complicated than it actually is…no, I’m not telling you that you must go through the multiple-hour process of seasoning cast iron when you first seasoned the pan (more about seasoning cast iron here). This step is much more quick and simple!

After the pan is clean and dry, place the pan on a burner, allow to warm for about 3 minutes, and rub a very small amount of oil (I suggest coconut oil, but olive and vegetable will work as well) all over the surface of the pan by using a paper towel. Make sure that the oil does not pool. This is a sign you used way too much oil. Use another paper towel to soak up any excess liquid.

2 thoughts on “The Dos & Don’ts of Cleaning Cast Iron”